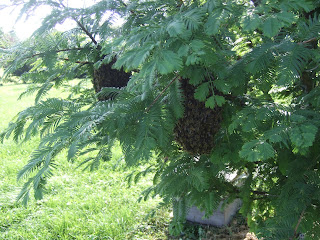 Why do Bees Swarm

Swarms are a normal part of a hive's life. They are actually planned ahead by the bees. Because it's an organized event they'll be very calm-- they have a plan, and they know what they're doing. They're not angry or upset. Instead they're gathering together and searching for a new home.

Dr. Thomas Seeley has created about 10 short videos of a swarm in progress. Beekeepers will love to see the stages of a swarm broken down and explained. The videos are posted on thehttp://www.sciencefriday.com/ web site. 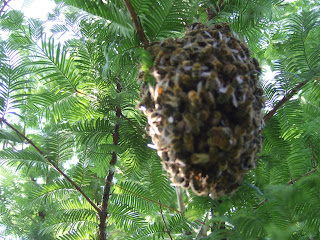 Bees swarm when their current home is too full. The hive decides it's time to divide. Half will stay behind in the current home and make themselves a new queen. The other half and the old queen will leave to find a new home.

A swarm is actually how honey bees reproduce. The best thing to do when you see a swarm is first, get a camera and second leave them alone. They know what they're doing and they won't hurt you. Their mission isn't to sting or hurt anyone--they're house hunting!

A swarm is actually a good thing. It's a sign of a 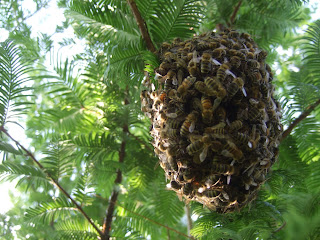 healthy and growing hive. Swarms usually occur in the spring and summer months from May to August.

The old queen will leave the hive, taking about half the bees with her.

She'll fly to a spot not too far away and half the hive will gather around her, forming a cluster. Usually they'll hang from a tree branch, but sometimes they'll choose a picnic table or another nearby object.

The Mechanics of a Swarm

Before the bees swarm they eat lots of honey which 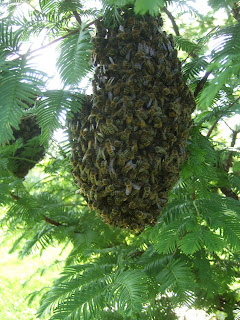 they store in t heir honey stomach. This is like packing before a big trip.

While the swarm waits, they send out hundreds and hundreds of scouts. These scouts are tasked with finding a new home. They'll search in a five mile radius, for a suitable home. The scout will carefully examine a potential home. Once satisfied she's found a good spot, she'll return to the waiting swarm.

Then she dances. The dance tells the bees where the location is. The better the location, the better the dance she'll do to convince them. Soon other scouts will go to check it out. Then they'll return and dance convincingly too. The bees will decide which location to go to based on the best dances of the scouts.

Before long, they'll decide to move to the new home. That's when the   scouts will make piping sounds. The piping tells all the bees, get ready and warm up your flight muscles because we're leaving soon. 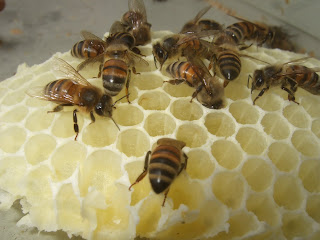 When everyone is warmed up and ready to go the scout will do Buzz Runs.

Once the scout bee does the buzz run all the bees will fly off within a minute. If you watch the video you'll see it's actually timed--60 seconds.

Once at their new home, the workers will get to work immediately secreting wax so they can create honeycombs.

Then they'll regurgitate that extra honey that they ate earlier into those combs. That way they'll have some food on hand. 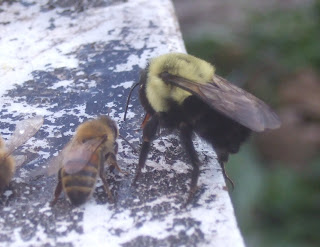 Back in the old hive, the remaining bees will create a new queen who will take over that hive.

It's a real sacrifice for the older and experienced mother queen to leave the hive and let her younger inexperienced daughter queen remain in the established hive.

Many beekeepers want to collect swarms. It's a way for them to get free bees.

Click  here  for a list of beekeepers in the Oxford, Middlesex and Elgin counties who are willing to collect swarms. 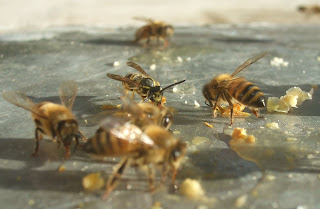 Note that most beekeepers will charge a service fee for the trip.

Before you call a beekeeper to come collect a swarm, please look over these photos below to be sure they actually are honey bees and not some other insect such as wasps, hornets or bumble bees. 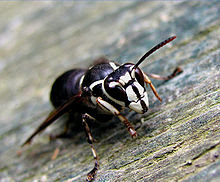 This black and white bald faced hornet builds a paper nest. This hornet is quite large and can be seen protecting a ball shaped paper nest hanging from an object.

Recommend this page on: